Prosecutors at the Denpasar District Court yesterday demanded Eric Roer, a Dutch national who is allegedly involved in an illegal wildlife trade of protected items from Bali, be sentenced to three years in prison.

“Based on evidence and the facts from the Court, the defendant [should be] sentenced to three years in prison and a fine of IDR100 million (US$7,131),” prosecutor I Made Lovi Pusanawan said, as quoted by Kumparan.

Roer is charged with violating articles from Indonesia’s 1990 Conservation Law for his alleged involvement in the shipment of protected items from the Southeast Asian country, including skulls of various animals like crocodiles and sea turtles, as well as snake skin.

Roer has reportedly been sending handicraft items made from protected species through ocean freight shipping to the Netherlands since 2013. Police in Bali handed evidence of his crime to public prosecutors in August, around three years after they began investigating the case.

Authorities previously said that the illegal items were sold for hefty prices abroad, between IDR50 to 80 million each, though they were purchased for only around IDR1 million each in Indonesia. 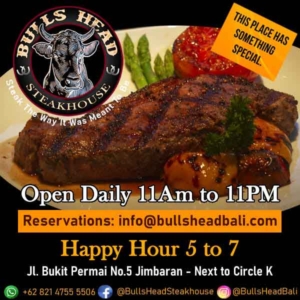 Jl. Bukit Permai No.5 Jimbaran - Next to Circle K

An official from the Bali Provincial government yesterday highlighted how some companies on the island still pay their employees below the minimum wage, after the recent announcement of the new provincial and district minimum wage for 2020.

“Ideally no company should be paying their employees below the minimum wage. But there’s always those who are obstinate enough to keep doing so,” IGA Anom Suradi, who heads the manpower and certification agency for Denpasar city, told Tribun-Bali.

The Bali administration has hiked the provincial minimum wage (UMP) to IDR2.49 million (US$177) per month for 2020, marking an increase of 8.51 percent from this year.

However, different regencies in Indonesia also have their respective minimum wages set, which are locally referred to as UMK. In Bali, for example, Badung regency appears to have the highest minimum wage for Bali with IDR2.93 million, while Denpasar city plans on setting the minimum wage to IDR2.77 million. In general, UMK is always higher than UMP and usually takes precedent in implementation.

Though it should ideally be welcome news for Bali residents, some took to social media to express their skepticism over the actual implementation of the minimum wage raise.

“It depends on the boss,” one user commented.

Jl. Bukit Permai No.5 Jimbaran - Next to Circle K

A 48-year-old Australian woman has been sentenced to three months and 15 days in prison by the Negara District Court, after she was found guilty of vehicular manslaughter that killed a 19-year-old motorbike rider in August.

“The defendant’s action caused the loss of life of another person,” presiding judge Benny Octavianus said, as quoted by Sindo News.

The woman, Susan Leslie O’Brien, received a lighter sentence than what prosecutors had previously demanded, which was six months in prison.

O’Brien was arrested in mid-August after she hit a motorcycle on the Denpasar-Gilimanuk Bypass and killed the rider, 19-year-old Rizqi Akbar Putra, who died at the scene from his injuries.

Today, the Negara District Court announced that she is guilty of violating Indonesia’s 2009 Traffic Law, which carries a maximum of six years’ imprisonment and a maximum fine of IDR12 million (US$853).

Her final sentence means O’Brien would be released at the end of this month, as it takes into account the time she already served. Her case reportedly had several extenuating circumstances that was taken into consideration, including her good behavior during trial, as well as the peace agreement between her and Rizqi’s family.

According to Australia’s 7News, O’Brien signed a peace agreement with the family and paid them about AUD1,550 (US$1,073) in compensation.